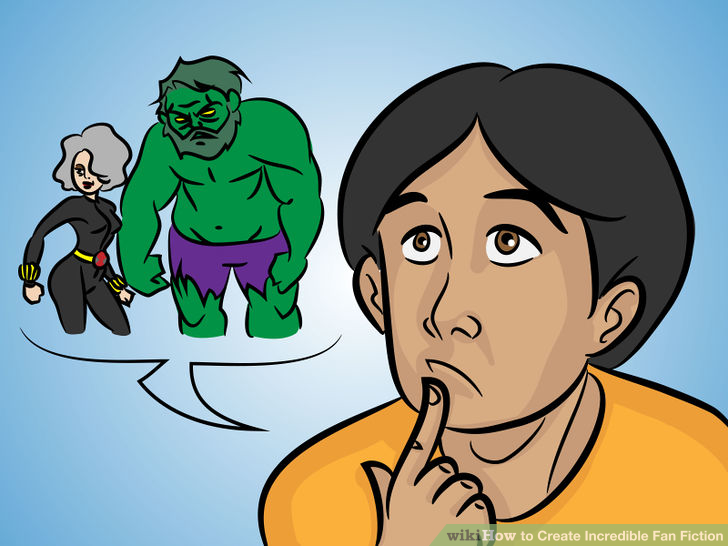 “Being a fan is like being in love,” says Lynn Karlsson, a fanfic writer. “You just want to eat, sleep, breathe, and love these characters, and spending time with them is the most engaging thing that you think of.”

Fanfic writer and artist Larry Mann says, “[Writing fan fiction and creating fan art is] inspiring for me. If I read a particular story or movie and feel inspired, I take those ideas and distill them down into their basic components and assemble them in a way that’s new and unique.” He also finds that fan art is “good practice for my commission work.”

Chris Meadows writes fan fiction “mainly because of the interaction with other writers. The community that I write fiction in is a roleplaying community [City of Heroes]. We roleplay as our characters in the game, and we write fanfic that can’t be covered in the game as a way to interact with each other. There are stories that we just want to tell, things we can imagine our characters doing, that we could never do in the game.”

When he first wrote fan fiction, Meadows did so without realizing there was an entire genre lurking in the halls of conventions. In fact, so many people have independently created fan fiction without knowing it already exists that I’ve begun to believe science fiction and fantasy are a crucible for ideas –that there is a natural extension between fandom and creation.

As mentioned in part one of this article, with creation comes a sense of ownership. Some professional authors say they do not like fan fiction because they created these characters, and therefore these characters belong to them.

In fact, the same feelings of ownership that make professional writers hold fast to their characters also exist in some fanfic writers. Meadows, who wrote a character set in an established universe not of his own creation, said, “I created a character who I feel a deep connection to. To have someone else do something with that character…I have sort of a flinch reaction.”

It is because of this love of character, these emotional responses, fan fiction writers will probably not stop writing and publishing fan fiction. Karlsson says she and others write fan fiction not because they are trying to compete with professional writers but because they are “fans, first and foremost. It’s the fandom that prompted my interest, and my outlet took writing as its format. This is a labor of love.”

Some fans believe that professional authors who do not allow fan fiction create something of an intellectual disconnect. Karlsson says, “When a professional writer publishes something, they’re putting something out there for public consumption, to engage the public’s imagination. Some people will have such extreme interest that they will want more stories, or slightly different stories, than the author can produce.”

And their imaginations have taken fan fiction writers to extremes of extrapolation. Established characters’ motives, appearances, and proclivities are altered with gleeful abandon — Willow was a lesbian in the world of fan fiction for years before she came out on Buffy the Vampire Slayer. One might say that fan fiction has few rules, and even they were made to be broken.

One of the most common practices of fan fiction is the disclaimer. Many fanfic writers state up front that they do not own these characters, something along the lines of, “This is not my universe. I only play here.” Many take a nonproprietary stance — that other people are free to imagine their own stories in a pro writers’ universe as long as they don’t attempt to charge money for their work.

The idea that writing fan fiction was not merely an extension of infatuation but a potential source of income was recently breached by Lori Jareo with her unauthorized Star Wars novel, Another Hope. Published by her own company, WordTech Communications, the book was available on Amazon.com for several days in late April before being removed, mostly likely for copyright violation. (Jareo did not respond to my request for an interview.)

The fan fiction community has come out against this writer, as well as any writer who tries to cash in on a flair for creating the perfect X-Files, what-if-Mulder-really-was-an-alien fantasy. If LucasFilm Ltd. takes Jareo to court, a potential ruling against her may set a precedence against all fan fiction, not just the ones who write fan fiction and charge money.

However, at least one fanfic writer has managed to turn her adult fan fiction into a book of erotica by changing the names and abilities of her characters so as to make them unrecognizable to mainstream readers. But fans of her particular universe will easily identify the source of her material. She has stopped writing fan fiction in favor of her new career.

So what is and is not legal? Ask three sources, get three answers: no, yes, and maybe.

Harold Feld, lawyer and Senior Vice President of the Media Access Project, a non-profit public interest law firm, clarifies the copyright law: “If you’re distributing it to friends in hardcopy, it’s okay under most interpretations of the ‘fair use’ exception to the copyright act. But sharing fan fiction with the whole world without permission is a violation of copyright law.”

ChillingEffects.org, a First Amendment and intellectual property law project, has this to say: “The First Amendment protects free speech, but there is also a copyright clause in the Constitution. These two legal rights are often in conflict, and so the rights of fan fiction writers to write and speak freely and the rights of the copyright owner must be balanced. Each situation can be researched and individually evaluated, but it is important to understand there are no easy answers as to who has a right to the characters… There is not a clear ‘right’ and ‘wrong’ side in the battle between copyright owners and fan fiction writers.”

Certainly it will take only one decision to clarify the law.

But even outright illegality may not stop fan fiction writers from doing what they love. According to Feld, “Fan fiction will be here to stay. What’s needed on all sides is a sense of proportion and restraint.”

But that might be easier said than done. Fan fiction clearing house www.fanfiction.net adds over a hundred new stories to its database each week. Perhaps as a result of this, fan fiction writers are coming under fire by the very writers they admire.

When I conducted my interviews, I was struck by the passionate responses by both the fanfic writers and the professional authors. Infatuation for the characters and the universes, ardor for their work or hobby, and fear about their futures: the fanfic writers are afraid of losing a cherished activity, and published writers fear both losing their livelihoods and alienating their fans.

Where authors have a very real interest in maintaining their intellectual property, corporations have the same interest in keeping their fanbase happy. If I were to take up fan fiction again, there is no question as to which universes I would choose to write in.

Some strategies to help both sides reach an understanding:

Strategies for the author who doesn’t want to allow fan fiction.

Send a cease and desist letter demanding that the fan writer immediately stop. Be very clear and firm, but polite. Feld suggests writing something like, “Dear fan, I’m glad you like my work, but I’m very attached to my character and I’m afraid I’m going to have to ask you to stop.”

Feld explains. “If you’re a writer who wants to maintain control, it’s you’re right, but you should do it in a reasonable manner and not treat people who buy your works as if they’re criminals. Be aware that some fans may react poorly to be told they have to stop, but basic politeness can avoid unnecessary ill-will.”

More importantly, consider the alternative. Feld says, “The likelihood that a fan writer is going to do serious damage to your brand is much less likely fairly small. By contrast, you can damage your relationship with your fan base if you piss people off. Also, many creators of copyrighted works have discovered that fan writing can provide benefits, such as the viral spread of your brand.”

Strategies for the author who wants to allow fan fiction.

Feld warns against any author giving blanket permission for fan fiction: “Creators need to take proper precautions to make sure they don’t appear to give up control. You would never want to say on your website, ‘Everybody, feel free to do what you want.’ Not only does it open the door to material a creator might find terribly offensive or damaging later, it might give up valuable commercial rights. For example, a media company can inform the creator, ‘We’re going to make a movie out of your work and not pay you.’ Alternatively, a media company might say ‘We won’t do a deal because you’ve given up too much control.’ So when you do this kind of encouragement, you want to make sure you’re doing it in a way that maintains an appropriate level of control.”

Author Mercedes Lackey has lit upon an answer that may prove useful to both fan fiction writers and professional authors: She only allows fan fiction of her world if the writer signs a release form.

“The release form basically says, you’ll not hold me liable if my stuff resembles what you wrote. It’s my fallback in case somebody comes along and says ‘you stole my idea,’ And if you haven’t filed it, then I can say, ‘What do you mean? You are [writing fan fiction] without authorization.’ It’s kind of Kafkaesque, but what the hell.”

Her release form can be found here: Lackey says, “Feel free to adapt it to your own purposes and use it.” Anne McCaffery also has a similar release form.

that can be used by professional authors. Published authors who permit not-for-profit fan fiction and in turn ask that the writer do the same should file a “non-commercial share-alike form.” Creative Commons then provides a notice for authors to place on their websites. This does not protect the professional author from being sued, but it does signal their openness toward fan fiction.

Strategies for the fanfic writer.

The bad news: times have changed since the days of photocopied fanzines.

Also, unless your favorite authors had access to your computer, they probably didn’t steal your writing; most ideas aren’t nearly as original as you think they are. Don’t sue them.

If you’re a writer of fan fiction, keep in mind that, according to Feld, copyright violations can incur a penalty of $10,000 per instance, plus legal fees. A writer with a whole catalogue of material dedicated to Chakotay and Seven of Nine can find him/herself begging for small change on a street corner.

Strategies for the media corporations.

Feld says, “If the big media companies alienate the fans, the fans stop buying your comic books, stop going to your movies and stop watching your TV shows. Companies that hold the copyrights learn[ed] after a while that coming down with a sledgehammer is not the way to deal with [fan fiction]. The copyright holders need to behave with business savvy and intelligence, and they need to see fan fiction not so much as a rights infringement issue but as a marketing opportunity. While at the same time, they need to exercise proper caution that their rights remain unambiguous.”

A brief roundup of corporate policy on fan fiction:

– According to a Marvel Enterprises representative, Marvel “does not have a comment about this.”

– Although Viacom, the owners of the Star Trek properties, issued cease-and-desist orders to fan sites, they quickly backed down from their position.

– Warner Brothers agrees to Harry Pottery fan fiction “provided you agree to their terms,” says Feld. Terms and conditions can be found in the fan fiction section. http://boards.harrypotter.warnerbros.com

Excellent articles on the topic can be found at: