How Do Mixed Marriages Work? When fans marry non-fans (and even fans of different fandoms) 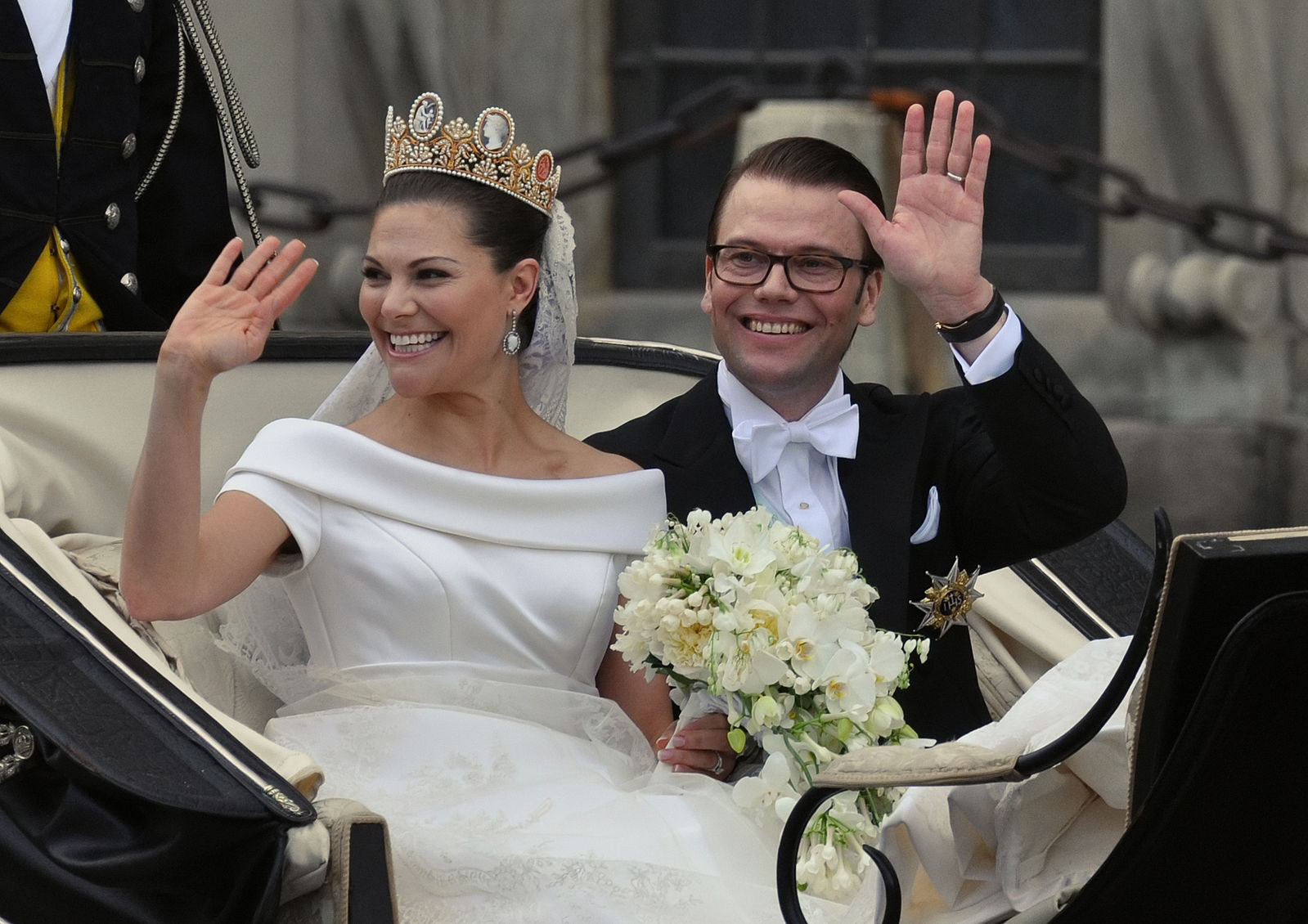 My husband and I are both science fiction fans, which means we had a great deal in common even before we met. His book collection mirrors my own, and he understands my ridiculous references like, “All tapes turn into Best of Queen” and someone has “a slight flaw in his character.” He even gave me the best-est gift ever: an acrylic paperweight that had its particles accelerated in a cyclotron.

I couldn’t imagine marrying, let alone dating, someone who does not share my passions. What would we have to talk about? My trip to the dentist? The last time I had a cavity, I needed to distract myself from the scary drill, so I donned my iPod headphones, cranked up the volume on my Star Trek II: Wrath of Khan soundtrack and pretended that I was Chekov, being tortured by Ceti eels.

Our relationship is not unique. Fans frequently date and marry other fans: common interests are one of many factors that make relationships a success, and an interest in science fiction, fantasy, and related media frequently allows for linguistic shortcuts that make communication simpler (e.g., fans of Buffy the Vampire Slayer know that the phrase “Bored now” is a prelude to imminent disaster).

But some date, marry, and live ’til death do they part with people who have no hobbies in common. Relationships between fan and non-fan are what I once referred to as a “mixed marriage.” But I’ve learned that marriages mix in all sorts of ways. And dating a fan is not necessarily the key to happily ever after.

Here are three types of fan-based relationships, a look at the problems they encounter, and some advice on how to overcome them.

APPLES AND ORANGES: RELATIONSHIP BETWEEN A FAN AND A NON-FAN

Having a relationship with someone not fannish, or even anti-fannish, when you like nothing better than to curl up with a good book — one with a tentacle’d alien clutching a screaming woman on the cover — can require extra thought and attention. Just ask Alaya Dawn Johnson (Racing the Dark).

When she and her boyfriend of six years, who reads no fiction, saw the Lord of the Rings trilogy together, she had to interpret it for him.

“The experience of genre means you have to take things for granted that he can’t take for granted . . . . The whole time we’re watching he couldn’t fathom why [the characters] were behaving why they were behaving. The whole epic nature of it was lost to him because he was caught up in the pragmatism.”

Short story writer Sean M. Murphy said that being married to someone who remains unbitten by the genre bug “is difficult at times, because I’ll encounter a great idea for a story, or I’ll write something that I think is great, and in that moment you want to have someone to share that with, someone who’ll dig it — and in some ways that can’t be her.”

According to Dr. Barbara Milrod, psychiatrist at the NewYork-Presbyterian Hospital/Weill Cornell Medical Center, “The huge issue is whether the two members of the couple can appreciate one another’s interests and not disparage them.”

A solid relationship requires good communication and similar values, such as how to spend money or raise children. If a couple can talk about their problems and resolve them with kindness, there’s no telling just how wonderful their relationship can be.

(And for the record, not one therapist has ever cited a mutual appreciation for the works of Dan Simmons as a prerequisite to a lasting union.)

Both Johnson and Murphy have other shared interests with their partners, and these interests keep them happily attached.

Murphy compares his mixed marriage to a relationship with spouse who hates tomatoes and when he loves pizza. “[Y]ou don’t give something up completely because your partner doesn’t like it. So you eat it a little less often, and they find something on the menu that they like, or can at least choke down. It’s a compromise, like so many things in marriage, and in life.”

Actually, Johnson sees one benefit in her relationship with a non-fan: he’s a good sounding-board for her writing. “He’s a smart guy. His perspective is so completely not of that world, he comes up with interesting suggestions.”

RED APPLES AND GREEN APPLES: RELATIONSHIP WITH A FAN OF A DIFFERENT FANDOM

Science fiction and fantasy have many offshoots, like comic book fandom or anime. Because fandom is so widespread, a person can date a geek without actually dating the same kind of geek. And sometimes problems arise when someone speaks your language but not your actual vocabulary.

On weekends, Ann* dresses up in medieval garb and reenacts history with the SCA, the Society for Creative Anachronism. Several years ago, she met Bob*, a gamer, and it looked as if their relationship was a match made in geek heaven.

Unfortunately, their relationship suffered from each of them having intense enthusiasm for two different fandoms — after all, “fan” is short for “fanatic” — and they did not spend as much time together as she would have liked.

In fact, Ann was completely uninterested in role-playing. She found it “silly, throwing dice. I was resistant toward it.” She begrudgingly attended their twice-a-month sessions “only because the person who was DM-ing lived next door to a great pizzeria.”

However, one night, a player dropped out, and she filled in the part. “I realized these people weren’t serious gamers. They were more into it for the camaraderie. We wound up eating, smoking, drinking, hanging out.” Ann found herself enjoying the gaming group and began to participate.

Ann said, “I looked for ways to make it interesting for me.” She talked to her fellow gamers and learned about their lives, their families, their pets. She found dice that she liked. After the relationship ended, she never went back to gaming, although she admits she misses the gaming group.

Currently, Ann is dating someone who attends media conventions dressed as a Predator. She occasionally gets him to attend SCA events with her — with a bit of planning on her part.

“I’ll evaluate it from the onset. ‘What would he like about this event’?” She tries to entice him with “a carrot. [Your buddy is] going to be there . . . . They have really good food.” However, she realizes she can’t make him attend every event. “If I feel he’s reluctant, if there’s any hesitance, I just say, ‘Look, if you’re not interested, then that’s it.’ . . . . I don’t guilt him into it at all, because I don’t want him to not have fun.”

“Common interests . . . would probably add more glue to their relationships, and they would obviously spend more time pursuing those interests together,” said Chicago-based psychologist Dr. Daniel A. Vogel. “But I’m not sure if having common interests is necessary to establishing a working, intimate relationship. Having shared goals would be more important.”

And if their shared goal is to get to level 60 together in World of Warcraft, that’s even better.

GREEN APPLES AND ORGANIC, HAND-PICKED, SUN-RIPENED GREEN APPLES: DATING A FAN OF THE SAME FANDOM . . . WITH A DIFFERENT OUTLOOK OR INTENSITY

Just because your aunt’s best friend’s second cousin likes the same “Japanese cartoons” that you do, it doesn’t mean you should let her set you up on a date. Relationship bliss is not guaranteed just because two people are fans of the same work.

I once dated a man who enjoyed the same movies and many of the same books that I did. But when discussing Star Wars, I learned he admired the Dark Side. I was appalled. I liked Star Wars because of its positive, uplifting messages about life and hope. He liked the watching bad-asses wield the powers of Force Choke and Force Lightening.

Even though on the surface we shared the same interests, we came at it — and the rest of our relationship — from different approaches. Star Wars: 2. Relationship bliss: 0.

Fans of the same activities can also find themselves at odds when one partner’s enthusiasm blossoms.

Yvonne,* and Zavier* also members of the SCA, began dating when Yvonne introduced Zavier to one of her favorite activities, medieval and renaissance dancing. She was glad he enjoyed it too, as she particularly liked going to balls. “I could dress up and look pretty,” she said.

But Zavier took a different approach. “He was interested in the history, in reconstruction of medieval dance.” As his interest grew more intense, he refused to attend SCA events that did not have dancing. “It would lead to arguments and issues. You meet and date and have this common interest, and all of a sudden it diverges. It drove me crazy.”

Even though Yvonne still enjoys dancing, she cites his single-minded approach to their hobby as one of the reasons she and Zavier broke up.

Dr. Rochelle Balter, a practicing clinical psychologist in New York City, said, “Where somebody has an overwhelming interest and the other doesn’t, the other partner feels shut out . . . alone, not wanted and not included. The couple may require couple’s therapy to work on communications and how they can share other things that are not this overwhelming interest.”

Zavier found the solution to the problem: according to Yvonne, he met a woman “as obsessed about dance construction as he was. Now they’re getting married.” (Yvonne is currently dating a non-SCAdian.)

According to research (http://www.msnbc.msn.com/id/19031744/), relationships are a success when a couple never stops dating. That means spending time alone together, as well as venturing out in the world together. Couples should find something they both like to do, and do it together. They might want to try some neutral ground, like cooking classes or learning to play an instrument.

Who knows? Couples might find themselves equally enthused about their new pastime, fannish or not.

But what matters most is that they are equally enthused about each other.

*Names have been changed.