Speaker for the Read: Public readings in science fiction 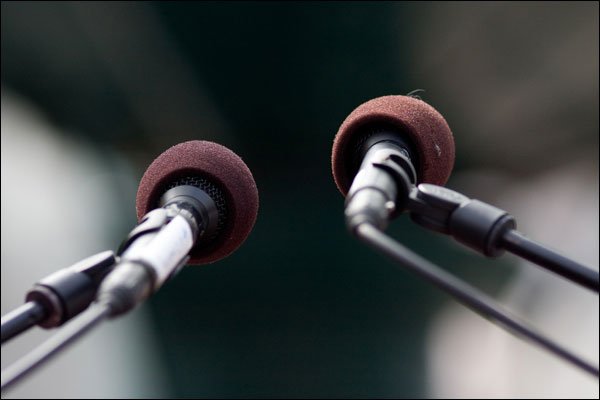 When Ann Tonsor Zeddies read excerpts from her latest book, Blood and Roses, for a private group, she did not have to bolster her confidence by imagining her audience without their clothes. She had only to look up. The audience, members of the Clothing Optional Dinner Club, were all naked — as was she.

“The fact that I was nude and the audience was nude didn’t enter into it that much. Everybody had come to have a good time. Even though they weren’t SF fans, I picked a section that piqued there interest. Honestly, the nude reading was one of the most fun experiences I’ve had.”

“Fun” is not a word most people would use to describe speaking in public, known in extreme cases as glossophobia. It’s about as terrifying to some as death (and more terrifying than appearing nude in public, nudophobia). But many authors are frequently called to read from their works. And some actually enjoy it.

One such author is James Patrick Kelly. “I like [public readings] because as writers we never get our immediate feedback from our fiction, so when you read [a story] to an audience, you get a feel for how it’s working. And I just enjoy the way it makes me feel when I read, because I get to re-experience the story. It takes a long time to write, but when you read it you remember what you thought when you set out to write it. It’s a way to reconfirm your impression of what the story is about.”

Zeddies, who got to practice public speaking by reading Lord of the Rings to her children not once but three times, says reading aloud helps her revision process. “I like to read things that haven’t been published yet because I get to have a chance to make changes for the better.”

Carol Emshwiller agrees. “I always like to read my stuff out loud because I get a new view of my own stuff. Even if it’s a published piece, I always see something I want to correct because I hear it in a different way.”

Andy Duncan, who began public speaking in high school, suggests that reading aloud helped him look at his own writing in a different light. When he attended Clarion West in 1994, he found himself reading to a fellow Clarionite, who happened to be blind. “That’s when I realized [my story] was funny, because he laughed the whole way through. He was delighted and I was disconcerted.”

No one who has heard Andy Duncan read his work aloud can forget his voice: words of wit wrapped in an accent so deeply southern that it almost seems a parody. Duncan uses that accent to his advantage when reading short stories based in the south. “Play to your strengths. If your accent or delivery makes you distinctive, then work with that.” However, the voice that elevates his readings into a real-time slice of Southern life may become a hindrance for other stories. “If I were reading something set in 1950s Soviet Union, my accent doesn’t work as well.” He apes his drawl to prove his point: “‘Let’s go t’ the lawnch pad, Ivan [pronounced Eye-Van].'”

Ultimately, readings are about the author’s voice, the one that comes through on the written page as well as the spoken one. The more successful readers use an element of theatricality to enhance their words.

Kelly says, “You have to experience the emotions of the story. If you’re reading an exciting part, your voice should be excited. There’s nothing more disconcerting than a chase scene in a monotone. In a love scene, you have to let your voice convey the emotions that are in the text. That’s something I look for: how connected the reader is to the words that he is reading.”

Emshwiller, looking to improve her reading, took lessons from an actor. “That helped a lot. He said, ‘If you’re nervous and you’re thinking about how nervous you are — you’re not thinking about your story.’ When you’re reading, you’ve got to be thinking.”

According to Ellen Datlow, the best readings occur when the reader interacts with the audience. “A good reading is an entertainment, like acting.” Datlow, along with Gavin J. Grant, has run an SF reading series at the KGB Bar, one of New York City’s two monthly readings, for approximately eight years (former curators include Mark Jacobsen, Terry Bisson, and Alice Turner). The other series, helmed by Jim Freund, is in its 17th year.

Datlow says there is more to a reading series than sending out notices and introducing the readers. “I think it’s important to get a good mix of readers. The important thing is to try to get people who fit together.”

Public readings, Datlow says, “makes the writer more accessible to the readership, and it’s good for the writer’s career. It’s a pleasure to bring someone who isn’t known into a large audience.”

But is it good for the genre? Datlow thinks so. “[Public readings] bring more attention to the genre: our readings are sometimes mentioned in the New York Times, Time Out New York and New York Magazine. I don’t know if it brings new readers in, but it’s nice to think it will.”

Pat Cadigan, who started a reading series in London almost five years ago when she realized, “there was nothing in place specifically for genre writers” agrees. “Science fiction has a long tradition of readers meeting the writers. It’s a very social type of thing.

“Actually, I think [public readings are] good for books in general,” says Cadigan, “because people who read books are interested in the author. They like to see, meet, and hear the author talk about the book and things peripheral to it.” At the Borders bookstore where Cadigan’s series takes place, “We just do novels, because it’s a bookstore, and I only take writers with something in print they can promote. Borders is very happy with us: we sell books.”

Datlow prefers writers “to read short stories. I think short stories work better, it’s self-contained reading.” However, “It’s not my job to instruct them. They pick what they want.”

Terry Bisson, who has recently begun a public reading series in San Francisco, does not instruct his readers, but has a piece of advice: “Make sure your pants are zipped up, and don’t go over half an hour.”

However, even with a tightly zipped fly, things can go wrong for our literary heroes. Good writers with engaging material and an entertaining speaking style have had bad experiences.

Zeddies says, “The most painful reading I’ve done so far was at a con where one person sitting two feet in front of me fell asleep. That was the pits.”

Kelly once read to a large audience, 500 people, at an outdoor theater event. Only one third of the audience was engaged in his reading. The rest ignored him. “It was disconcerting to see so many people not pay attention and not even be embarrassed.”

Emshwiller, who recently attended a convention, said, “I don’t like it if you’re reading something funny and nobody laughs, not a grin, not anything. That happened to me the day before yesterday.” She believes her experience was also marred by external factors. “Doors were slamming, people were going in and out, there was noise in the hall. That was hard for both the listener and the reader.”

Emshwiller once attended a reading given by Bisson where she was the only member of the audience. “Terry Bisson read anyway.” She enjoyed the private reading and having the author to herself.

Not all writers like to continue under those circumstances. Duncan found himself at a reading where the only attendees were his then-girlfriend and one of his Clarion instructors, Michael Swanwick. Duncan tried to invoke what he heard was “the Tim Powers rule,” which should be used when readings are underpopulated. “If you can afford to buy a drink for the people who show up, you adjourn to the bar and buy them a drink and talk with them, and everybody gets more out of the experience.”

Duncan, however, was not allowed the luxury of a stiff drink. “Michael said, ‘You must read it because I want to hear you and because it would be great practice for you.'”

Practice is in fact a very good way to improve ones reading skills. The authors and organizers I’ve spoken with have all suggested that practice makes perfect. They also had other advice:

Duncan says, “Figure out what sort of typeface, spacing, and font to print it out, so it’s about a minute a page. Take your watch off and put it in front of you. No matter how good it is, at 20, 25 minutes, people are getting tired of you. If I go over 20 minutes, I notice it, and the audience notices it too. If [the organizers have] given you 40 minutes, read for 20, 25 and then do a Q&A. You need experience interacting with the audience. People come to see Harlan Ellison, Peter Straub, and Howard Waldrop not only because they’re great but because they enjoy interaction and hearing funny stories.”

Emshwiller says, “Slow down. So many people read too fast, especially those not experienced with reading. It’s almost as if they’re not listening to their own story. And if they don’t pay attention to their own words, it’s hard to understand them. They have to experience their own reading, which some people don’t seem to do.”

Datlow recommends that authors speak up. If an author does not project her voice, it can result in a poor reading.

Kelly says, “I try to read the story aloud to myself within a couple of hours of when I give the performance, so my voice can find the sense of the sentences and where I should stop. I’m sort of a hammy reader, so I’ll do some voices to differentiate speakers, and do gestures, [which] I borrow from American Sign Language. Some of these gestures are written on the script so I know what I’m doing.”

Zeddies says, “My advice would be to try to tailor the reading to your audience. Choose something you think will be lively and interesting and evoke a response to the people you’re reading to. Practice in private so you won’t be stumbling. And do it often enough that you’ll be able to look up and make contact with people — I think that’s the most important thing.”

Public readings do more than connect the authors to the reader: equally as important, it connects the readers to each other. I met a good friend at a reading. Upon meeting, we already had something in common: we were both fans of that particular author. Local readings provide some of the camaraderie found at conventions and SF societies without the obligation of joining or the expense of travel and hotel.

But mostly, I like being read to. I concur with Zeddies when she says, “There’s nothing like hearing the author’s work in his own voice. It makes you feel as if you know the author who wrote this story for you.”

Science fiction societies around the world, such as the Philadelphia Science Fiction Society, sponsor author readings. Below is a partial list of where other author readings can be found: